I am not a media whore

Poor guys at Sky been trying to get me on a lunch for ages
Posted by Asad "AKDizzle" Khan at 01:03 No comments:

Clever bit of targeting from Microsoft.
Posted by Asad "AKDizzle" Khan at 11:41 No comments: 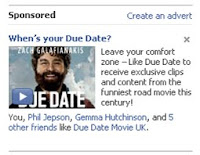 Why are you showing me Ads to things I already like Facebook?
It's a waste of advertising spend and does not add to my user experience. Facebook's arrogance in the market probably means this wont be sorted anytime soon I imagine
Posted by Asad "AKDizzle" Khan at 05:54 No comments:

A search campaign with a difference

The best campaigns are always the ones that make you wonder why people werent doing this from before
Posted by Asad "AKDizzle" Khan at 11:15 No comments:

Is anybody else frustrated by Youtube's system of storing favourites. You keep on seeing them constantly changing the UI, higher Def videos etc (which i'm not complaining about at all, improving these things is an absolute must) but I do not understand why the favourite system has been left alone.

Wouldnt it be awesome if people could save their Youtube favourites into specific folders?

I currently have over 200 favourites on youtube, with no easy method of going picking something out, outside of keyword searching or going having to going through the linear process of checking page by page.

Just the basics of being able to store them in separate folders would definitely improve my youtube experience.

Surely I cant be the only one who feels this needs to be addressed?
Posted by Asad "AKDizzle" Khan at 12:49 No comments:

My Rant Against Fox

Right I uploaded a dvd quality video of the below scene on Youtube. It's a scene where Liam Neeson owns the baddie over the phone. It's not a long scene nor does it give away the plot.

What the scene does do, and does very well is entice excitement for the film and make you wanna watch the movie if you havent seen it before :)

Anyways after the clip onto youtube i was shocked to see that thethe retards at Fox Interactive had decided to take it down, citing copyright infringement? They're so afraid of content being distributed outside of their control that they're pulling down stuff which would actually raise purchase intent for their movies.